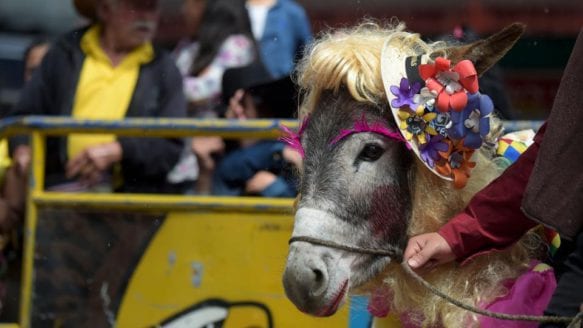 Donkey Fair and Festival in Jaipur​

About Donkey Fair and Festival in Jaipur​

During mid-October many traders and farmers flock the annual Donkey Fair and Festival in Jaipur​, believed to be Asia’s largest, in Rajasthan. Looneywas is the palace where the fair gathers per annum. it’s just 20 km far away from Jaipur.

Most of the deals are struck between traders, who sell the donkeys further to washermen, potters, and construction workers to be used as load carriers. Thousands of donkeys from everywhere north India are brought here for purchasing and selling. The donkey races and different sports are organized for the merriment people. this is often a must-visit fair for a rare sight indeed.

Besides the donkeys, recently camels and horses have also been added to the shopping list with many visitors even feeling that the horses are fast establishing a dominant position within the 500-year old fair’s donkey tradition.

This is an annual celebration that’s famous among tourists due to its uniqueness. Numerous travelers visit this fair just out of curiosity. it’s just a good that’s conducted for trading donkeys. this is often a 500-year-old tradition that’s almost like the camel fair of Pushkar. The fair takes place during a small village, Looniyabaas that’s just 20 km far away from Jaipur.

Donkey race is for entertainment in Jaipur

In this fair, there is a race of donkeys and horses for the entertainment of the people. There are many programs to make the fair interesting.

Many breed asses come to the fair

In this unique fair of Rajasthan, donkeys of Kathiawadi breed are very beautiful in appearance.

If you like this article on Donkey Fair and Festival in Jaipur​ then share it with your friends and family members to appreciate our work.